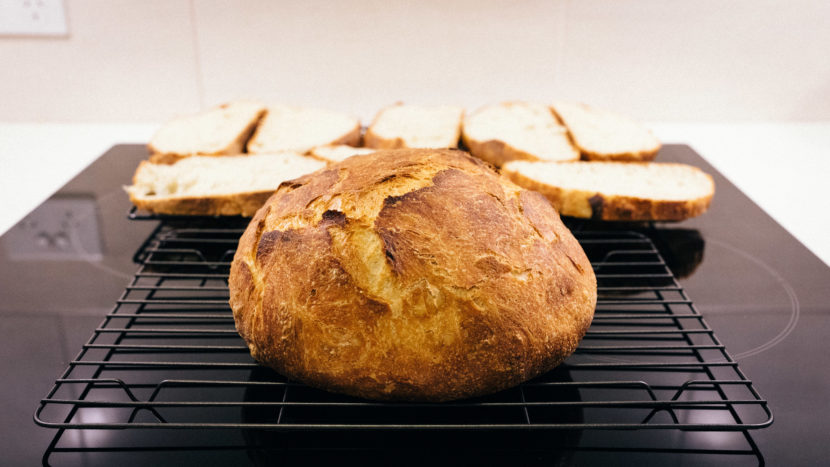 Back in July and August, Kristina had been on a bit of a bread-making spree. We have an old bread machine that Kristina bought from Vinnies back in 2009 when she first moved over here from the US, and she’d been using that with varying amounts of success. I was talking to some of my co-workers and one of them recommended a book called Flour Water Salt Yeast and said you absolutely cannot go past it. I bought that for Kristina’s birthday, as well as the thing it says to bake the bread in, a Dutch oven.

It’s a really interesting book, even the most basic recipes only use a tiny amount of yeast (2 grams/½ a teaspoon), you don’t knead them, and the shortest recipe has the dough rising for five hours and proofing for another hour. You can get a good idea of how it all goes from the man himself, Ken Forkish.

As it turns out Kristina doesn’t really have the patience for it, so the bread-making has become my thing, and OH MY GOD THE BREAD FROM THIS BOOK. It is absolutely epic, nice and chewy like sourdough and the Dutch oven is the magic around how the crust comes out so good.

I’ve been doing a batch of bread almost every weekend now, and there’s something really enjoyable about the whole process. I’ve been tooting my efforts, get a load of all of this damn bread! The first two photos were the “Saturday White Bread” recipe where it’s done in one day, the third was the Overnight 40% (actually 35% and rye) Wholemeal Bread, and the last was the Overnight White Bread (which I screwed the timing up for because I didn’t read the recipe of when to start it and so had to put it into the fridge overnight so it didn’t rise too much, but it came out delicious anyway).