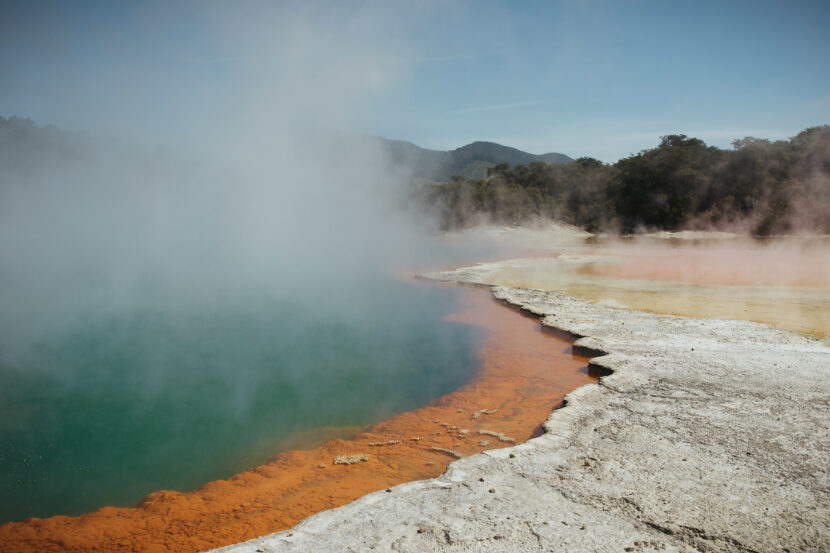 On Monday last week we woke up at arse o’clock in the morning to catch a flight to Auckland! We’d been to Queenstown two years ago but hadn’t seen the North Island yet.

We hired a car and stayed in Parnell for the first two nights which was quite lovely (it’s also apparently one of the most expensive suburbs in New Zealand which I’d 100% believe), and the first partial day we were there just involved wandering around the neighbourhood taking some photos.

The second day we drove out to Piha to see the black sand beach which was extremely cool. I couldn’t capture it in the photos but when you look at the sand against the sun it really sparkles thanks to its volcanic origins!

We also went to the Arataki Visitor Centre and tromped through the forest on a walking track. It was very neat but the only photos were a vista from the centre and the big totem pole there as well, because the forest itself wasn’t particularly photogenic. 😛

After that we walked from our AirBnB to the CBD, and quickly decided that that was a large mistake due to the sheer amount of construction going on and blocked-off streets. It made Sydney’s construction look positively pedestrian!

There’s a pizza chain in New Zealand called Sal’s that claims to do genuine New York-style pizza, so we walked to the closest one for dinner and gave it a go, and oh my god. Kristina said it’s about 95% of the quality of the actual New York-style pizza she had when she lived in New Jersey. She’d been talking about how good it was for years, and I now finally understand it!

Day 3 we drove to Rotorua, which is about three and a half hours drive, so we broke up the trip by stopping in at Hamilton and visiting Hamilton Gardens which were absolutely fantastic. It’s divided up into a bunch of incredibly well-designed and well-maintained gardens from throughout history — plus some whimsical ones — and I can’t recommend it highly enough.

After that we continued on through to Rotorua itself and went for a lovely walk through Whakarewarewa Forest which is a forest full of massive redwood trees, then visited some work colleagues of Kristina’s — and Colin, their miniature wire-haired dachshund — who live in Rotorua and went out for a delicious dinner at Macs Steakhouse on Rotorua’s “Eat Street”.

Unfortunately the B&B we were staying at (“Sandi’s B&B”) wasn’t good… turns out it was on a major road that has large trucks going down it extremely loudly at all hours of the night, some enough that they’d actually vibrate the bed, and it had the world’s stupidest problem where there was a pear tree that was growing over the top of the cabin we were in and the fruit was ripe enough that the pears were randomly dropping onto the roof with an extremely loud THUD. Sandi made us a full breakfast in the morning which was delicious but it didn’t make up for the ruined sleep. 😴

Rotorua is known for its geothermal springs so on day 4 we visited “Wai-O-Tapu Geothermal Wonderland” and it was very impressive. The sulphur smell was something else, especially since it came it with steam so it was both humid and smelly!

Our last full day we started with visiting a wildlife park called Paradise Valley Springs, after having another shitty night from trucks and pears thudding on the roof. We were there first thing in the morning so nobody else was around which was pretty sweet, but the farm animal section didn’t have very many animals in it and it seemed like they’d have liked some more company. We figured that it probably seems a lot more social when there are other people there.

The absolute best part of the day, however, was the visit to the Cornerstone Alpaca farm that broke up the drive from Rotorua back to Auckland! They had a whole presentation before we went out to see the alpacas, which was quite interesting, and the tour consisted just of Kristina and me. They’re so soft, and very pushy about getting food, haha.

After that, our final night was spent in a hotel in Newmarket. We wandered around and took some photos which you can see in the album above. We made a second stop at Sal’s for dinner, and afterwards were poking around the cable TV channels in the hotel to see what was on, ended up watching the first game of the T20 England versus South Africa cricket match, and Kristina ended up quite enjoying it! I was explaining the rules as we went along and she’s pretty well got the hang of it now, to the point that we’ve at least temporarily subscribed to Foxtel Now to be able to watch more T20 games, hahah.

Our flight back to Sydney on the sixth day didn’t leave until 4pm so we went to the Auckland Museum to kill time after we checked out from the hotel, and it was actually really neat. The whole ground floor is a massive Maori and Pacific Islander exhibit with all sorts of cultural artefacts and details of their history, and on the second floor was a fascinating exhibit on volcanoes.

Next time we go back to New Zealand I reckon we’ll probably be hitting up the South Island (Te Waipounamu) again, but it was definitely a good trip — sans the terrible sleep in the middle at least, anyway.